With the editors of this journal, some of us have learned to discover paradoxes where others pursue only Academic doxas; layered narratives and unexpected affects where once were arguments, elucidations, and critiques. More than two decades since the launch of Paradoxa, we are now coming across Open Access journals with names like Capacious that are readable on small screens. And so too, we have maximalist fictions beginning to emerge from repeated, minimal acts of attention, expanded to include image, sound, and touch along with text. A sublime aesthetic can be sensed in works that were written in digital media and intended to be read there. The movement of our own bodies can compel a narrative movement—so that each of us can have, in Steve Tomasula’s words, “the disorienting sensation of not only reading the ‘book’ in my hands but being inside it.”

More than any collection I’ve seen, this one edited by Astrid Ensslin, Lisa Swanstrom, and Pawel Frełik shows that our electronic narrative arts, though they are not yet fully formed, are already trans-national, multi-racial, cross-cultural and diversely gendered (and genre’d). And that’s a good way to start on the next generation of literary production.  —Joseph Tabbi, University of Illinois at Chicago editor, ebr (www.electronicbookreview.com)

Small Screen Fictions” revolutionizes our understanding of narrative and its relationship to media. Helping us to recognize how pervasively digital technologies change the way stories are made, disseminated, consumed, and understood, this cutting-edge collection gives us a new language for thinking about reconfigured, fluid relationships among authors, users, makers, audiences, and producers; new language for theorizing the novel fictions such assemblages create. Crucially, “Small Screen Fictions” makes visible how these shifts have reinvented conventions for storytelling in any medium, creating pro-sumers who immerse themselves in narratives, blend fact and fiction, follow and participate in stories across media, and pursue unique and idiosyncratic meanings from mass-produced texts. An innovative and important work of scholarship that defines the terms for future conversations on the topic.  —Sherryl Vint, UC Riverside

This special issue promises big intellectual payoffs through a focus on the small screen. The range of essays is far-reaching but interconnected and written by authors who deeply know their subject of study. With the topic of scale all the rage in contemporary critical discourse, “Small Screen Fictions” examines smallness from diverse interpretative perspectives, genres, and objects of study: small interfaces (tablets), small readers (of children’s literature), small gestures (touching the iPad), and small utterances (tweets). This will be an issue that, despite its exploration of interactivity and hypertext, one will want to read straight through. –Jessica Pressman, San Diego State University 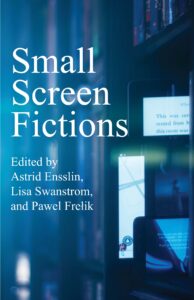