Paradoxa is a peer-reviewed, scholarly periodical that publishes articles on genre literature: science fiction, horror, mysteries, children’s literature, romance, comic studies, the fantastic, the occult, westerns, oral literature, and more. Paradoxa invites submissions on all aspects of genre literature which make a significant and original contribution to the study of those genres. Find Submission Guidelines here.  Paradoxa has been independently published since 1995.

Please note that Books and Individual Articles from Paradoxa are now available on this website to purchase and download on our Volumes page. For more information on rates and ordering options, including an Unlimited Access Pass, please visit the Rates page. All income from the sale of books and articles supports the continued publication of Paradoxa. We will continue to add new material so come back to visit. Please Contact us if you are interested in specific back issues that are not yet available on-line.

Announcement of the Winner of the Martin Schüwer Publication Award 2022

“Dr Felipe Goméz’ most recent research project is dedicated to the manifestations of resilience and perseverance in Latin-American comics that feature apocalyptic settings. [He emphasizes an] analysis of the aspects of race and gender which are reflected in the community and its protagonists’ survival strategies. His article “Would it be possible? Apocalypse and Resistance in Latin American Graphic Novel” (Paradoxa no. 32, “Comics and/or Graphic Novels” 2021), is an important addition to contemporary research on apocalypses and post-apocalypses. His focus, however, is on a subject that has been marginalized and underrepresented in more than one way: First, Latin-American comics, which are front and center here, are much less represented in international research than comic traditions of the northern hemisphere. Second, the research on the genre of science fiction, to which (post)apocalyptic scenarios belong, has focused on Eurocentric perspectives for a very long time. Only recently has research on science fiction in the southern hemisphere gained momentum. In this context, hegemonial narratives are exposed, and marginalized perspectives revealed. Dr Felipe Goméz’ award-winning article makes a crucial contribution to the broadening of research perspectives.”

American histories of comics have traditionally highlighted what they deem the indisputable U.S. birthplace of this mass-culture phenomenon, pointing to Richard F. Outcault’s Yellow Kid (1895) as the first comic ever produced. Alternately, the European view tends to favor the creation of this ever-popular medium by Swiss author Rodolphe Töppfer, with his Les Amours de monsieur Vieux Bois (1827 – first published in 1837) and highlights the importance of early works such as German author Wilhelm Bush’s Max und Moritz (1865).

A similar, apparently irreducible dichotomy has appeared concerning the origin of the “graphic novel.” American critics consider Will Eisner’s A Contract with God (1978) as the first graphic novel ever produced, while European historians point to Hugo Pratt’s La Ballata del mare salato (1967 – although its influence is said to be felt primarily after its translation into French in 1975). And it is not unusual to see credit for the origin of the graphic novel given to the Argentinian El Eternauta, by Héctor Germán Oesterheld and Francisco Solano López (1957).

Apart from matters of national pride and predominance, these divergent views are also due to unresolved questions regarding the meaning of the terms involved. Töppfer’s books would not qualify as a comic if one were to consider the genre as primarily defined by the use of the speech balloon. But then neither would such seminal works as Alex Raymond’s Flash Gordon or Hal Foster’s Prince Valiant. In the Franco-Belgian domain, debates have also excluded such historically significant works as Joseph Pinchon’s Bécassine or Louis Forton’s Les Pieds nickelés. In the Italian tradition, practically all pre-Second World War productions, such as Sergio Tofano’s Signor Bonaventura or Antonio Rubino’s Quadratino would automatically be excluded.

The final definition of “graphic novel” remains open to debate, as any customer of a major North American booksellers’ chain knows full well. Major commercial publishers recycle “classic” comic book fare under a new label and present it beside recent, more “literary” productions issued by niche or alternative publishers. Indeed, we can easily go from all-encompassing definitions such as offered by Stephen Weiner…

“Graphic novels, as we shall define them for this project, are book-length comic books that are meant to be read as one story. This broad term includes collections of stories in genres such as mystery, superhero, or supernatural, that are meant to be apart from their corresponding ongoing comic book storyline; heart-rending works such as Art Spiegelman’s Maus; and non-fiction pieces such as Joe Sacco’s journalistic work, Palestine.” (Stephen Weiner, Faster Than a Speeding Bullet: The Rise of the Graphic Novel. Introduction by Will Eisner. NBM Publishing, 2012.)

… to much more restrictive and specific ones, like that proposed by Thierry Groensteen…

“[T]he comics medium has matured, […]. Its standing has greatly improved, to the extent that it is now regarded as a form of literature in its own right. It has diversified by moving into new areas (history, personal life, science, philosophy, sometimes poetry) and by taking on new forms (diary, reportage, essay).” (Thierry Groensteen. The Expanding Art of Comics. Ten Modern Masterpieces. Translated by Ann Miller. University Press of Mississippi, Jackson, 2017, p. 3.)

Such appraisals also seem to vary according to the national origin of the critic, with North American criticism generally more willing to include mass cultural products within the field of the graphic novel, while European critics highlight notions of “maturity” and generic evolution that reserve the label for productions outside of, or in the margins of the commercial mainstream. Comics, bandes dessinées, fumetti, tebeos, manga—as they are known with important variations in different cultural contexts—and their critical reception, thus appear to differ significantly depending on their national histories and cultural preferences, and are only superficially identical.

On the other hand, comic book characters, their authors, and their publications have crossed national and linguistic boundaries to an extent rarely seen in the world of literary fiction. Any account of the Franco-Belgian “bande dessinée” would be incomplete without acknowledging the impact of Golden Age American comics, either as aesthetic models (George McManus’s influence on Hergé, Caniff’s influence on Jijé and other artists of the realistic school of drawing), or as competitors whose symbolic dominance led to the development of an autochthonous industry. American underground comics and authors of Mad magazine inspired the creators of the French Pilote and encouraged the transformation of the medium so that it appealed to the tastes of an older audience. In return, Franco-Belgian “ligne claire” informed some notable contemporary North American creators (Jeff Smith, Chris Ware…) and even influenced the international art world (Dutch illustrator Joost Swarte).

A constant whirlwind of reciprocal influences has marked the evolution of the comic genre across North America and the major European markets, as well as important markets in Latin America, most notably Argentina. Hugo Pratt, Alberto Ongaro, and Mauro Faustinelli contributed importantly to the development of the genre in that country, while European translations of Argentinian authors such as Alberto Breccia, have helped generate cultural recognition for the new genre of the graphic novel. Not all experiments were equally successful. Moebius (pseudonym of French author Jean Giraud), invited by Stan Lee to draw the famous Silver Surfer, did not meet with unconditional approval in the U.S. Periodic attempts at translating celebrated series such as Tintin and Astérix for an English-speaking public have not been able to duplicate the success of the characters in their respective native countries. The iconic Italian western Tex Willer is a major hit in Brazil, but only one story has appeared in North America, and then only because it was drawn by well-known American artist Joe Kubert.

In recent decades, the increasing critical recognition of comics as a legitimate artistic and literary genre has spawned the creation of several significant international events, such as the Angoulême International Comics Festival (France) and the Lucca Comics and Games convention (Italy), helping to further break down barriers and to bring national traditions into ever closer contact, while at the same time favoring the representation of comics as specific national products deserving of state sponsorship and protection granted through agencies such as the “Centre belge de la bande dessinée” in Belgium or the “Cité international de la bande dessinée et de l’image” in France.

What can a transnational analysis of the development of comics and graphic novels teach us about the nature of the genre? Do the exchanges and circulations (of authors, characters, styles, subjects, publishing formats…) between national traditions allow for a rewriting of the evolution of graphic narratives, outside of nation-based or linguistic models? What do these migrations tell us about any immutable or invariable properties potentially common to graphic narratives, independently of their chronological and geographical positioning, their intended audiences or their degree of cultural recognition? How and to what extent can the historiography of comics and graphic novels benefit from adopting a global approach to the subject?

There are 3 issues currently under consideration. Stay tuned for further information.. 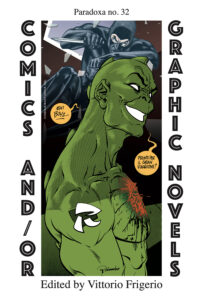