“This issue of Paradoxa on espionage fiction engages novelists and scholars in a wide-ranging conversation on the genre from the early twentieth century to the post-9/11 era. The essays are attentive to contemporary literary theory and build on previous critical paradigms while positing new frameworks for analysis. Single-author articles reevaluate canonical figures as well as authors who challenge the traditional male-centered history of the genre. Extensive interviews with Gayle Lynds and Olen Steinhauer become illuminating dialogues on espionage fiction and writers’ methods. Virtually all readers will learn much from this fine collection.” —Kay Mussell, Professor Emerita of Literature at American University and co-editor of North American Romance Writers (1999)

“This new collection of essays is rich in the secret byways of international intrigue. Spy fiction deserves the serious attention found in this superb issue of Paradoxa. Just keep it a secret.” —Clive Bloom, Professor Emeritus, Middlesex University,  editor of Spy Thrillers: From Buchan to le Carré (1990)

“This enterprising and varied collection sheds new light on the gendering of spy fiction and permutations of the genre since the Cold War. It addresses neglected figures, offers new interpretations of established authors, and includes an exceptionally thorough survey of recent espionage fiction beyond its usual Anglo-American parameters. The collection profits throughout from situating the genre within its evolving cultural contexts after World War II and in the wake of 9/11. An extra bonus is the inclusion of in-depth interviews with novelists Gayle Lynds and Olen Steinhauer as well as critic LeRoy Lad Panek.” —David Seed, Professor of English at the University of Liverpool and editor of A Companion to Twentieth-Century United States Fiction (2010) 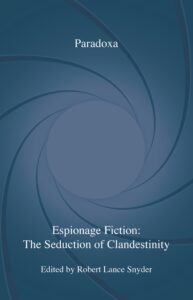