“Darko Suvin’s is the best intellect that has yet engaged with science fiction. Sometimes the result is a wrestling match, sometimes a beautiful marriage, sometimes both at once.”  –– Ursula K. Le Guin

One of the things that make all of [his] work so distinctive is the way in which it negotiates the strictures and disciplinary boundaries that define proper academic inquiry.…  It is worth paying special attention here to the deep importance of Brecht’s work for Suvin’s definition of science fiction. The concept of estrangement is, of course, derived from Brecht’s Verfremdungseffekt, […] the distancing of the reader or viewer of a work of art from the assumed or naturalized world they inhabit un-self-consciously in their everyday lives. (The other major figure influencing Suvin’s thought here as elsewhere is Brecht’s great Marxist contemporary and the most important theorist of Utopia in the first half of the twentieth century, Ernst Bloch). In this move, we see at work one of Suvin’s most characteristic and productive intellectual strategies, something that will also become quickly evident to the reader of the diverse and wide-ranging pieces collected in this issue: Suvin’s willingness to cross boundaries of all kinds—between disciplines, forms, and so-called high and low culture—and productively cross-fertilize concepts drawn from a variety of sources.  –– Phillip E. Wegner, from the “Foreword”

“Though perhaps best known as the world’s leading critic and theorist of science fiction, Darko Suvin is, more generally, one of the hardest-working, most strenuously intelligent, and most erudite and wide-ranging literary and political intellectuals at work today—not to mention a poet of more than routine interest. Superbly edited by Phil Wegner, this issue of Paradoxa gathers together a rich variety of Suvin’s writings—many of them unpublished and almost none of them widely accessible until now—that are essential reading for those seeking a fuller understanding of one of our least dispensable thinkers. Like Suvin’s own recent collection Defined by a Hollow: Essays on Utopia, Science Fiction and Political Epistemology (2010), this issue shows that Suvin has been producing major work for more than four decades and is doing some of his very best work right now.”     —Carl Freedman, Louisiana State University

“This volume offers the relief map of a full and fruitful intellectual life: poet, theorist in Utopian studies, Brechtian theatre and Science Fiction, and unwavering activist, Darko Suvin has given us “tough” thoughts, as Huck Finn put it, in all these fields. We have much to thank him for.”   —Sylvia Kelso, James Cook University

“Jamming as many literary references and insights as possible into an essay, this Yugoslav (of 7-8 languages and a Communist in his youth!) excites the mind, and remains loyal to a lively Gramscian–Marxism that others avoid. Hang on for Suvin’s whiplash ride through Science Fiction, Poetry and Brechtian-ismo.”  —R.G. Davis, founder of the San Francisco Mime Troupe in the 60s, a Brecht Center in the 70s, a dissertation on “Ecological Aesthetics” at UC Davis in 2009 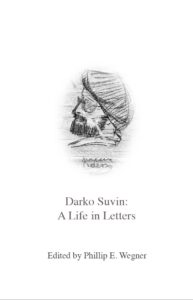